2004, Color/Sound, DV, 52mins
Anyone who knows Bollywood knows Helen, the face that launched a thousand songs and died a thousand deaths. Throughout the sixties and seventies, she was the feline fatale, always favoring a blonde wig and vampy wardrobe, cat claws at the ready. But even her bad-girl brashness couldn’t save her from a cinema that demanded her death, time and time again. Bad Girl with a Heart of Gold is an experimental narrative that weaves four of Helen’s signature roles together in a dizzy feat of dislocation. To further heighten the vertigo, the filmmaker includes re-enactments in which he himself plays Helen, now with a touch of well-worn drag. The outcome is that the Helens, those authentic and those augmented, converge in a supra-filmic space where they plot their liberation beyond the bounds of cinema and gender binaries. (Steve Seid, Pacific Film Archives, Desire Under The Banyan Catalog) 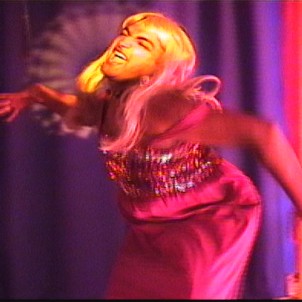